Really excited to collaborate with Andrea Baker at the 2016 International May Festival on her award-winning show, “Sing Sistah Sing!” on 2 May at the Hessisches Staatstheater Wiesbaden!

In “Sing Sistah Sing!”, British-American mezzo-soprano Andrea Baker celebrates the extraordinary sound of famous Afro-American female voices, accompanied by Albert Horne at the piano. While many of these legendary singers turned to Jazz and Blues to express their deepest emotions, some also became exceptional interpreters of opera and art song.  Just like the famous protagonists, Andrea Baker has a special connection with the songs of the plantation workers – the music of her forefathers. 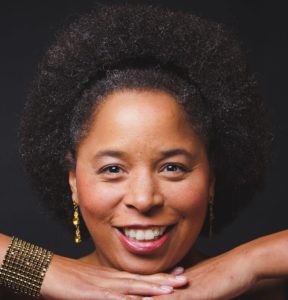 Among them were many courageous pioneers, both in the civil rights movement and in the arts. As such, “Sing Sistah Sing!” is a monument to them: singers like Ella Fitzgerald, Leontyne Price, Donna Summer, Marian Anderson, Eleanora Fagan and Billie Holiday, who all rose to international fame.

Andrea Baker tells their stories with the aid of a “story quilt”, a blanket consisting of fabric pieces stitched together, used to depict Bible stories and family trees while also doubling as a secret plantation map. Since slaves were denied an education and consequently most could not read or write, these “story quilts” provided a means to secretly pass on their knowledge from generation to generation.

Andrea Baker has enjoyed great success in large Strauss and Wagner roles at the Wiesbaden State Theatre, bringing her enormous stage presence and dramatic intensity to roles such as Ortrud in “Lohengrin” and Die Amme in “Die Frau ohne Schatten”. With “Sing Sistah Sing!”, she shows a completely different facet of her abilities. This very personal musical homage to her idols includes music from George Gershwin’s “Porgy and Bess”, Bizet’s “Carmen”, as well as a diverse selection ranging from Jazz standards to Gospel, Pop and even Wagner’s “Wesendonck Lieder”. A special part of the evening is a tribute to Billie Holiday on the occasion of the singer’s 100th birthday anniversary in 2015. At the piano is the State Theatre’s Chorus Master Albert Horne, who led the chorus of Cape Town Opera to win Chorus of the Year at the 2013 International Opera Awards in London for their performance in “Porgy and Bess” at the Philharmonie in Berlin.